I promised I would write an FO Friday post yesterday, and intended to feature the Baby Blanket. Unfortunately for those grand plans, I ended up staying in the Netherlands for an extra day, so couldn’t do anything except eat waffles, knit and watch copious amounts of National Geographic when we weren’t lugging things up the stairs…

This post is long overdue – the baby blanket was part of my July Resolutions! I finished it on time, but I never washed it, and I didn’t want to take photos of a slightly grubby white object…so having just had a chance to wash and block it, I can finally show it to you! 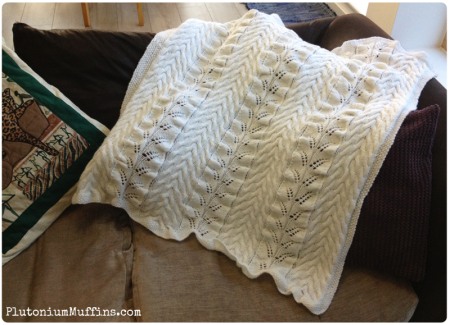 The blocking didn’t work so well – you can see the corners are still curling a bit. The pattern was already fairly open, and you could see most of the detail, so I’m going to say it was a waste of effort. However, it’s also good because it means the intended recipient, who doesn’t know a thing about blocking knitted objects, won’t have to do so every time it gets washed. 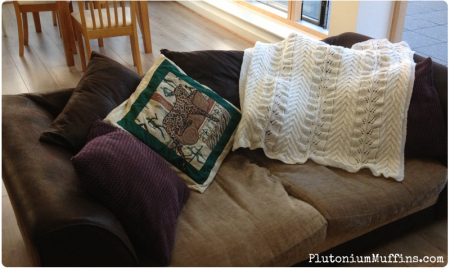 The baby it is intended for was born three months early – I haven’t actually met him yet, or indeed seen the parents for four months, and I’m trying to arrange a meeting. However, I hear he is doing well and all other details are to be discovered. I’m very excited to give the blanket to them, and will be making the trip as soon as I can! 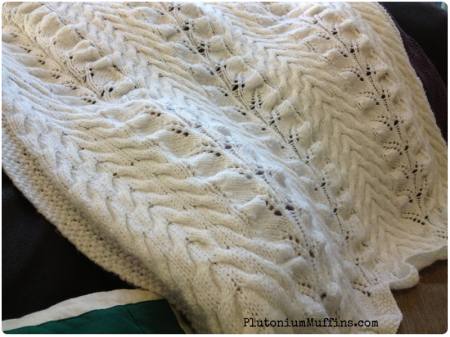 I’m going to Devon today to get the last of my stuff, and start my new job on Monday. It has been an extremely busy month, and I’m fairly looking forward to chilling out with a job that will require me to not travel for a while…….in theory!

That’s it for now!