I’m really happy to show you pictures of my Campaign for Wool yarn for FO Friday. I finished it last weekend when Craft Boss was round, and it is now sitting on a cajon in the lounge waiting for a project to be found that will suit it. I suspect it will become a hat. Watch this space!

I won the purple roving from the Campaign for Wool following Wool Week last year, and it languished in my stash for ages, with occasional attempts to spin it thwarted by my dissatisfaction at my prowess on the spinning wheel. Then, I went to Unravel 2013, and everything changed.

Following that show, I managed to spin up my Cheviot fleece into the resolution yarn – and at that point decided I was ready to try spinning something a bit more exciting. I had bought a lot of roving in funky colours – yellow, red, orange to name a few, at the Spring Knitting and Stitching Show, and I was going to spin it with my purple roving if I did nothing else.

So, I started and I got about a quarter of a bobbin in. Then, I moved to Devon. The post about this was fairly anti-climactic, you may not have even realised how big the move was until I just didn’t go back to Kent if you were just a reader…and my spinning wheel sat in storage. For five months.

I moved back to London, and the spinning wheel sat in storage for another two months while I was settling in – with some of the singles still sitting on the bobbin, poor things.

During this time, I was working on the roving on a drop spindle that I picked up in Hackney. I have a huge drop spindle JS bought me in Cornwall a few years ago, but it is no good for anything but really thick yarn, so the purchase of my little one was a blessing. 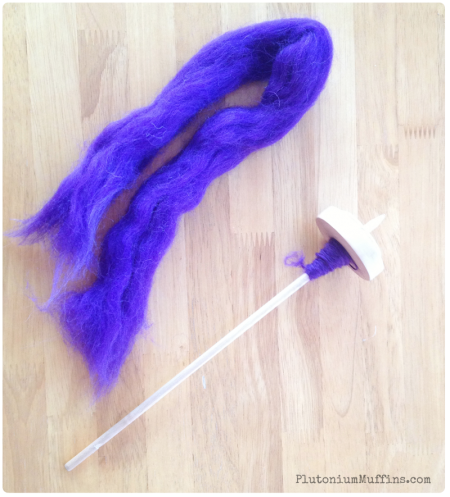 Finally, I took out my poor neglected spinning wheel and I had my spinning lesson a few weeks ago. I set to finishing my Campaign for Wool roving with enthusiasm, and last week, I finished it!

I hadn’t really realised how much this yarn has followed me through this year, but now that I’ve written all that, I feel like it has been on the same journey I have! We are both now settled in London (sort of) and life is reaching a rhythm that I am finding pleasant, and that is having a healing effect on some of the aspects of mental health that I have been finding most troubling for years.

It definitely needs to be a hat. A hug for when the brain is having a struggle I think. So, that’s the story of the Campaign for Wool yarn! What are you working on? Did you do anything for Wool Week?

PS I didn’t mean for this post to get so philosophical. Or…musing I suppose. Here’s an image of a puggle.