It’s been a record breaking period of silence at Plutonium Muffins. I’ve been doing a lot of really exciting things, few of which relate to craft, and many of which have left me so exhausted that I got home from work last night and was asleep by 7:30pm. It’s been a very long, very crazy few months. I thought I’d give you all a brief update, then maybe by breaking the “oh God my first post back has to be really good” silence, I won’t be intimidated by the thought of posting anymore!

Without going into too much detail, here is the low-down!

John and I moved all of our stuff to Bristol, finally. For the last five years we’ve had things strewn over Devon, Kent and London – it took two huge van loads and flooring the attic, but it’s finally done! I’ve managed to sort out my craft room/our guest room, and we finally have furniture!

I completed Nanowrimo! I’ve wanted to write a novel since the age of 9 and can safely say achievement unlocked! Whether or not anyone will ever read it is another matter, as it was more an outpouring of ideas onto paper (figuratively speaking) than any great feat of literary genius. It was a hard slog though – I only decided to do it about four days in, then had a couple of weekends where I was too busy to do anything. A couple of days of silence locked away at home while John was away and I hit the mark! 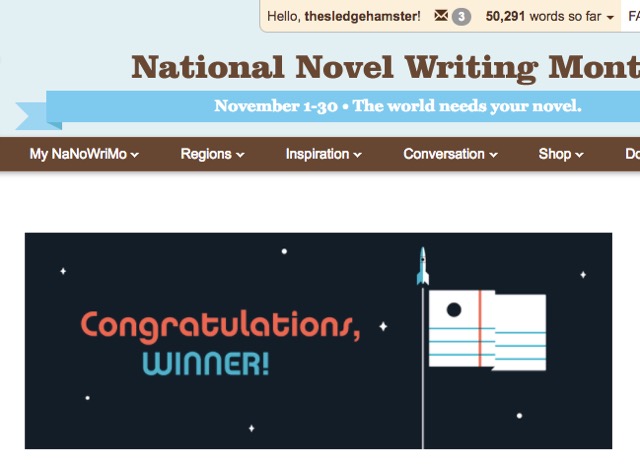 Obviously, Christmas happened! There wasn’t a lot of crafting as I made a conscious decision not to stress myself out getting ready for it, but we spent a lot of time visiting with friends and family. I got some lovely pressies, including Anna Maltz’s “Penguin: A knit collection” from John. I’ve been wanting it for ages and clever boy that he is, John went and perused my craft bookcase to see if I already had it.

I’ve not made anything yet, but there are things queued, including Rockhopper, Fledgling and Pinglewin!

All the things happened in January. Someone at work retired (which was a bit of a personal loss to me as she was a friend and I don’t get to see her every week anymore) and I had to take over parts of that job, which has been quite tough. On top of that, I started a beginners course in accounting, with a view to eventually becoming a fully fledged bean counter. I had to suspend it due to other work activities that you’ll find out about….but I start again on Monday and I can’t wait.

I also hit 1,000 subscribers on my YouTube channel, which was super exciting and the result of a lot of hard work learning to edit videos. The support has been unreal, and I don’t intend to give that up (although it has suffered the same silence that the blog has).

More excitingly, I started running again, after a year and a half hiatus due to a knee injury and then laziness. I’d been doing pretty well, although running at 6am in midwinter in the UK was quite hard work. There was thick ice on the roads, although the silence in the middle of Bristol was lovely at that time on dark cold mornings. We do live on a hill though, and walking to the bottom of it was sometimes more of an exercise in skating than anything else! This is all past tense because…

We went skiing! I’d not been before and it was utterly lovely. I had a wonderful time and was starting to feel quite confident on these ridiculously long poles when I had an accident….

It wasn’t anything too bad – I just fell awkwardly, twice, and sprained my knee. It’s not completely healed yet, and I’m still not managing to get back into running, or walk around a lot. As a result I spent quite a lot of my free time cross stitching and making videos for my YouTube channel, which still sit on my laptop waiting to be edited because I didn’t have a suitable chair for my craft room and it was too sore to sit at my desk.

I’ve actually tried to break the blogging silence a few times, and the first time was while I was trying to recover from the knee injury. I discovered that trying to blog while medicated and on a poor wifi signal was ridiculously frustrating.

I worked on my garden and produced something quite lovely (if I do say so myself, and I must credit my mum for doing most of the work), and started working 13 hour days at work to complete the goal for…

…a new office! My company moved its head office six minutes down the road to a more modern, bigger, better location with beautiful furniture, plenty of co-working space, and a real emphasis on trying to give us, the employees, a great place to feel comfortable at work. What I didn’t anticipate about this project (which I found out about on my very first day at the company) was that I would become the spearhead for the moving process. From helping everyone at the old office to become paperless, to physically packing crates on the last Friday we were at the old place after everyone else had come home, I put the rest of my life on hold to bring it over the line on time.

We moved last week and it’s even better than I thought it would be! I officially stood down as a ‘change agent’ last night, and am now living in a post-move world where I’m not entirely sure what I should be doing on my weekend now that I’m not looking at charts of equipment and floor-plans. We celebrated with doughnuts and a party, which was lovely.

I got a chair for my office as a result of the office move – I donated money to the companies charity of the year, and they let me take a chair home. Tonks loved it (excuse the mess, I need to do some tidying) and its much more comfortable. So, plans for this month are many – but I’m going to go back to my monthly resolutions, so hold your horses and you’ll find out all about my plans for April soon.

I feel guilty that I’ve not been around as much as I would have liked – but not too much, as I couldn’t have managed the last few months if I’d been putting pressure on myself to document my crafting. It’s the first time in years that I’ve got through such a period of intense activity without a mental health ‘incident’ – and I think that’s absolutely the greatest thing about it all.

Here’s to being around and never a silence to break again!