Below is a happy moment – the boys each wearing a tiger, me wearing a penguin, all of us clutching Old Rosie ciders… I’ve mentioned that I learned to play the violin in the years between moving to England and starting at Uni. Many of the happier moments of my life have come from this association with music — and when JS introduced me to folk music, the number of these moments expanded exponentially. 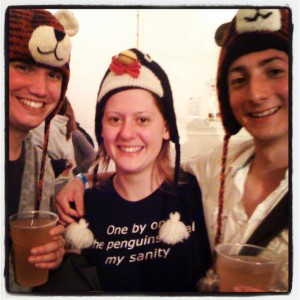 A hug for tiger lovers

My first folk festival experience was at Towersey Village Festival, an affair that takes place over numerous fields with stages for music, tents for workshops, entertainments, a show ground, a craft fair and dozens upon dozens of other traditional English activities. One of the highlights of the festival (apart from, obviously, the music) is the sheer number of real-ale options, proper cider and other fine drinking opportunities — fuelling a weekend of frivolity, loudness, and sheer silly behaviour. 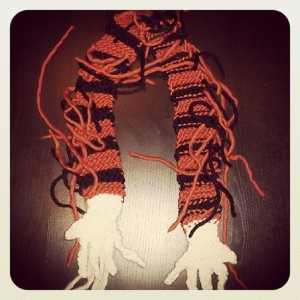 On one of the afternoons, TJB, JS and myself were strolling through the show-ground when we spied a stall selling knitted hats. These hats were no ordinary hats — they were in the shape of animals. The boys immediately spotted the ones they wanted — matching Tiger Hats — which before long were affectionately nicknamed Tiger-Tom and Joe-O.

December that year found one of them remarking upon the need for knitted hugs as a passing comment. No doubt they didn’t think I could make good on the request — Ravelry provided the answer in the form of Sarah Pasternak’s Hug. 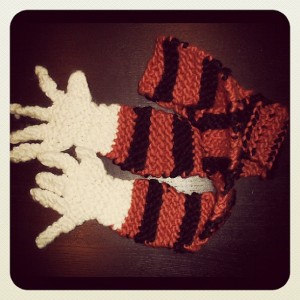 I bought the yarn and spent a day in the hospital knitting them — this would have been a fairly miserable day otherwise, and it was also the only way of getting the boys, who were both my flatmates at the time, not to see what I was doing.

I’ve never actually seen them wearing their scarves, which in fairness were a bit shorter than I wanted them to be due to a yarn shortage — but nevertheless, a project well-worth doing.