JS likes to joke that when you put me in a room full of things to sort out, I get all excited and scurry around in the manner of our old hamster*, cleaning and tidying and getting all involved in organisation. He’s not exactly wrong — he took this series of photos of me last night at 1 am, when I should have been in bed for over two hours (it was a school night!), but instead was re-sorting my two knitting toolboxes**.

There is still more to do — when I left for work this morning I emphatically told him “When I get home tonight, I’m going to tidy the rest of the lounge!” 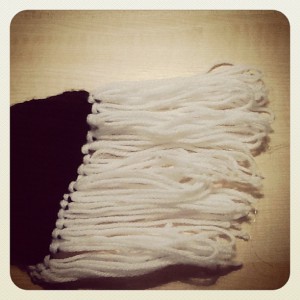 We went to the Imperial College Techtonics Christmas Concert last night. It was brilliant, they did some amazing stuff, and an incredible mash-up of The Twelve Days of Christmas and other Christmassy tunes. I also spent absolutely ages adding a fringe to the Secret Santa Scarf, which is nearly done — just the embroidery left! I definitely distracted one of the guys singing in the group, who kept staring at my scarf as he was dancing along our side of the room (we were sitting in the front row). Ahh well!

** If he asks, I was looking for his lost earphones, and mine…but really, I was just getting excited at exactly how many seed beads I have! And all the COLOURS!