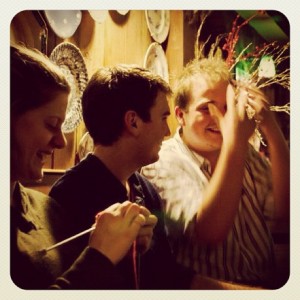 I’ve traditionally had a bit of a thing for legwarmers. Wonder-Gran made me a pair when I was a teenager that were really crazy in their colouring and style. I have no idea how she made them, but I loved them to pieces. They somehow went missing, and I realised when I went to Glastonbury in January and I was pulling on my rather sombre black ones. I decided to make my own!

They’ve taken a bit of a back-seat. I’m not good at knitting for myself, I’m not as motivated as I am when I’m making stuff for other people, so I’m still only about halfway through. I used an app on my iPad to work out the pattern — I’ll do a review of that app at some point, it’s called Stitchopedia and is very good.

I’m using a variegated yarn that I’ve had for years, and is definitely an unknown. I have two shades of the same yarn with the same variegation pattern — pink and purple. I’m alternating between the two (although I’ve only done two sets so far) and will see what they come out like. I’m not too fussed if they’re not brilliant — I’m having fun knitting them anyway.

Does anybody else wear leg-warmers? When?

Anyway, that’s all for now!