You’ve had a rather general overview of who I am in About Me, and a description of the start of my knitting adventures. The next step will be a chronological progression through some of the projects I’ve done, to get you up to speed, and provide a (hopefully interesting) demonstration of how my skills have progressed over time.

I’d just purchased a book from the South Kensington Book Shop called Beautiful Knits for Heads, Hands and Toes by Alison Dupernux. I returned to my room in Fulham with piles of cheap King Cole Yarn, a set of 3.75 mm and 4 mm aluminium needles, and, having knitted about three granny squares, decided now was the time to start knitting real things. 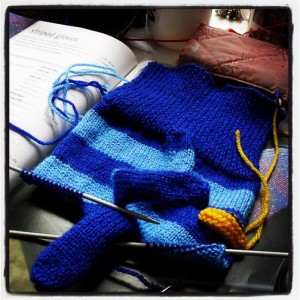 I asked TJB* what he wanted, and he stated “gloves”. I did some reading of the pattern for “Striped Gloves” and decided that I knew better. I didn’t knit a tension swatch (they were for losers, I thought) and I purposefully learned the…purl…stitch for this project. I went for it, knitting continuously for a good two days, watching a lot of Friends, dropping zero stitches (an achievement I still can’t equal) and by the end of those two days, I had one glove. 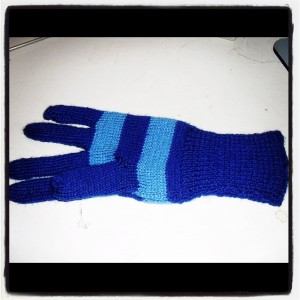 By the end of the week, TJB was proudly wearing two gloves – one with slightly lumpy fingers, the other with a big hole where the thumb joined the palm, and me having no idea how to fix it. I thought it wouldn’t matter, and the result is plain to see.

I phoned Wonder-Mum and proudly told her of my achievements. Before I knew it, she was requesting her own — and I gave them to her at my cousin’s house, where his wife, Super-Kim, immediately wanted a pair as well. And so it was that the first three things that I knit ‘for reals’ were gloves. Lots and lots of gloves.** 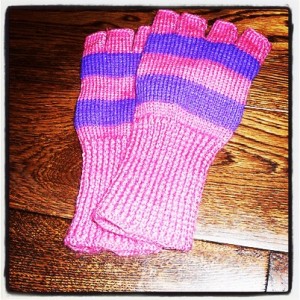 If you’re reading this as a first time knitter, I beg you to know that I’m poking fun at myself for not knowing enough about knitting, and that a ‘cow-boy’ approach to knitting will suffice. With the gloves, I was lucky — the only problems have been casting off too tightly on each finger when I decided to go finger-less for Wonder-Mum and Super-Kim, things I tackled the only way I knew how — by stretching.

I’ve since learned that tension, yarn weights and practising stitches for half an hour before you tackle an actual complicated project are essential to success. But, that’s a story for another day!

* In the interests of privacy, I’ll keep real names off this blog unless there is a good reason for not doing so.

** I haven’t knit this particular pattern since.